The importance of sea ice ridging

The story in the news

Last week a little municipality of western Manitoba on the southern shores of the Dauphin Lake in Canada was caught in a media frenzy after homes in Ochre Beach were destroyed and seriously damaged by a wave of lake ice. The BBC titled 'Creeping wall of ice destroys homes in Canada' and other media showed dramatic pictures (here and here) and videos of what they sometimes inaccurately referred to as an 'ice tsunami'. In fact this natural phenomenon is commonly referred to as ice shove, Ivu, or shoreline ice pileup and can occur on the shore of almost any large body of water (see figure below) when sustained high winds set free-floating pieces of ice into motion. For me this event was a good excuse to talk about the mechanical properties of sea ice and the mechanism of ridge formation as I was asked to give a short presentation at our weekly Weather and Climate Discussion meeting (see also the WCD blog) at the Department of Meteorology of Reading University .

The power of sea ice

What the owners of these (now crushed) houses on the southern shore of the Dauphin Lake have experienced is very reminiscent of the early accounts made by the explorers of the heroic age of polar exploration. They have all testified of the enormous power of the sea ice and their stories are often tragic. On June 12 1881, the USS Jeanette, a few weeks after discovering two of the New Siberian Islands under the command of George Washington De Long was crushed by the ice and sank. In November 1915 and on the other side of the planet Ernest Shackleton describes how its ship, the Endurance, after being trapped by the ice and having drifted for nine months was also destroyed by the ice [Shackleton2010]: "Then on Sunday, October 24, there came what for the Endurance was the beginning of the end. [...] throughout the day we watched the threatening advance of the floes. At 6.45 p.m. the ship sustained heavy pressure in a dangerous position. [...] The shaded portions represent the pool, covered with new ice that afforded no support to the ship, and the arrows indicate the direction of the pressure exercised by the thick floes and pressure-ridges. The onslaught was all but irresistible. The Endurance groaned and quivered as her starboard quarter was forced against the floe, twisting the sternpost and starting the heads and ends of planking. The ice had lateral as well as forward movement, and the ship was twisted and actually bent by the stresses. She began to leak dangerously at once." One boat, the Fram, under the leadership of Fridtjof Nansen famously survived these high pressures due to its ingenious design and drifted with the ice for almost three years from Siberia to the other side of the Arctic Ocean and back to Norway. 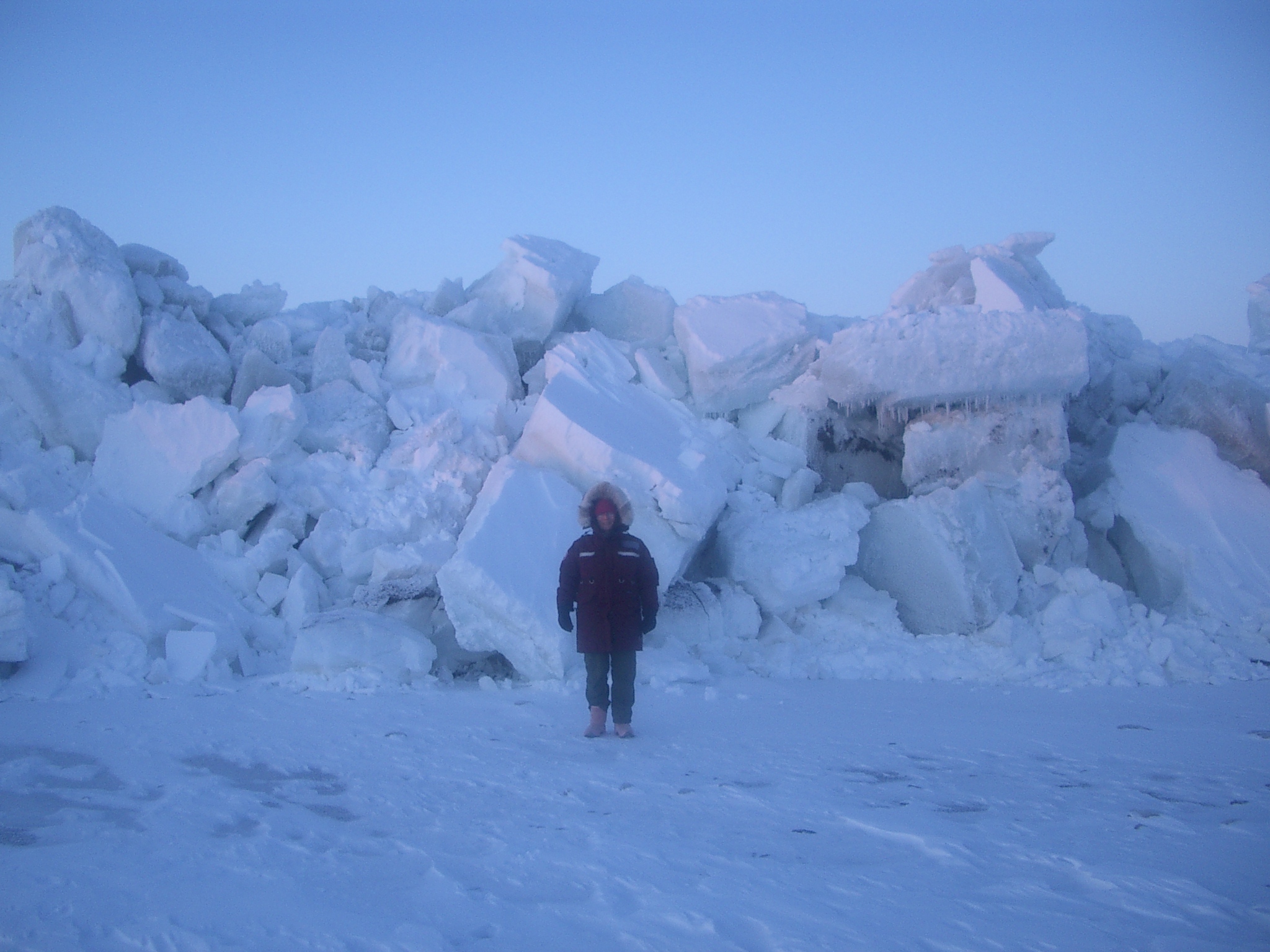 Ice rubble pile formed in January 2006 at Barrow, AK as the result of an ice shove (www.gi.alaska.edu/snowice/sea-lake-ice/images/ice_events.html). 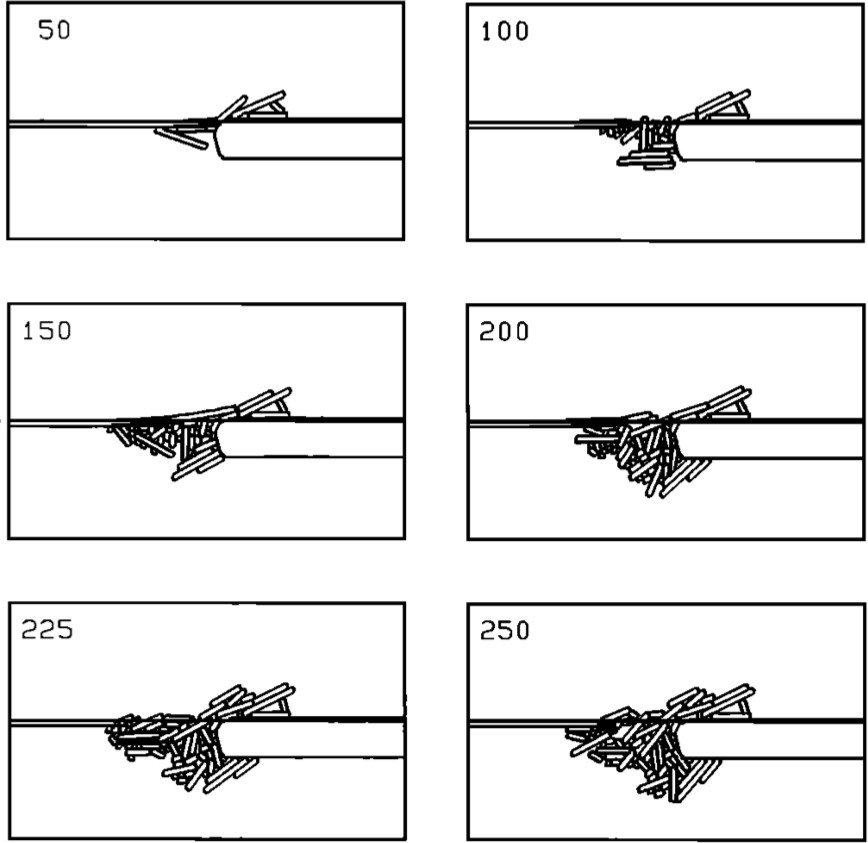 Sequential snapshots from a ridging numerical experiment performed by Hopkins. The ice thickness is 30 cm and each frame is 12 m x 20 m. The numbers on the top left corner are the time that has elapsed in seconds.

Modeling the ridging of sea ice

It is important to better understand the mechanism of ice ridging and to try to estimate the forces that the sea ice can generate in order to design adequate structures (ships, houses, paltforms...) in the polar environments. One of the most complete description of ice ridging of sea ice was given in a series of papers by Mark Hopkins [Hopkins1991, Hopkins1994, Hopkins2006]. Using a two-dimensional particle model Hopkins showed that the ridging process can be divided into four distinct stages. The first stage begins with an intact sheet of lead ice impacting a floe and ends when the sail reaches its maximum height (figure on the left). In the second stage the ridge keel deepens and widens. The stage ends when the maximum keel draft is reached. In the third stage the direction of growth is leadward creating a rubble field of more or less uniform thickness (this stage correspond to the ice advancing towards the house in Canada as shown here) . The third stage ends when the supply of thin ice is exhausted (or when the wind stops). In the fourth stage the rubble field is compressed between converging floes. The results of simulations establish the dependence of ridging energetics in the first and second stages on the thickness of the ice sheet and the amount of ice pushed into the ridge. The average profiles of the simulated ridges delineate the growth process in the first, second, and third stages. The energetics and profiles of the fourth stage were described by [Hopkins1998]. Lead ice extents of up to 1300 m are pushed into ridges to determine maximum sail heights, keel drafts, and ridging forces.

In contrast to what most people think the Arctic and Antarctic sea ice is for its most part in constant motion (as illustrated by the drift of the Fram) under the combined effect of the winds, ocean currents and internal forces in the ice (in addition to the usually more modest contributions from the Coriolis force and gravity force from sea surface tilt). The sea ice cover that is composed of a multitude of very thin blocks of ice (ice floes) follows in the Arctic two main large scale circulation patterns, the transpolar drift (from Siberia to the Fram Strait) and the Beaufort Gyre while in the Antarctic the ice follows a general cyclonic flow at the sea ice edge (further south) while along the coast of the continent it flows mostly anticyclonicaly. In order to understand the dynamic (and the thermodynamic) of the sea ice cover the mechanism of ice ridging must be correctly described in the models. Indeed as discussed in details in [Martin2007b] ridges affect the momentum and the heat exchange between sea ice and atmosphere and ocean because they strongly increase the local surface roughness and thickness of the ice. Therefore, the sea ice drift and deformation interact with the climate system and its changes, and it is a key issue to both the remote-sensing and modelling community to provide products of good quality. Currently, in collaboration with researchers from NASA's IceBridge project (see figure on the right), I am investigating the impact of these ridges of the atmospheric and oceanic form drag on sea ice. 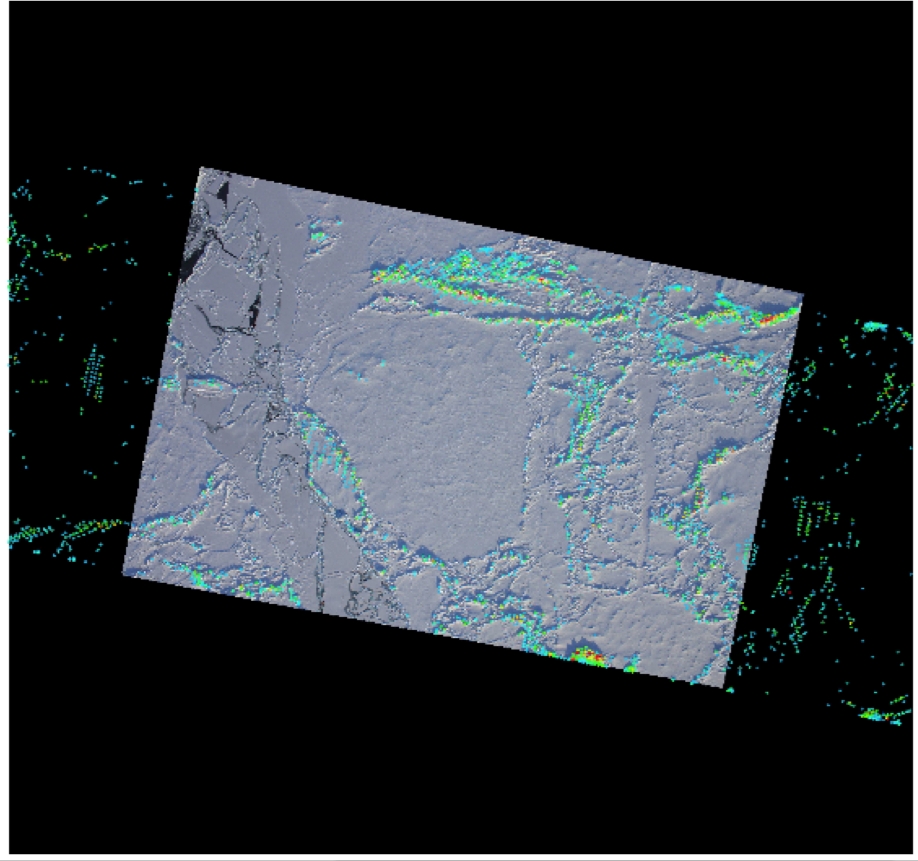